Transcend The Miseries of This World (Part 1)

Each of us seeks a place where we are perfectly comfortable and happy, yet our bodies and this world have so many miseries built into them. This article is edited from a lecture given by Jagad Guru and gives important insight into how to transcend the suffering of this world.

The wise, engaged in devotional service, take refuge in the Lord, and free themselves from the cycle of birth and death by renouncing the fruits of action in the material world. In this way they can attain that state beyond all miseries.
—Bhagavad-gita 2.51

In his purport, Srila Bhaktivedanta Swami Prabhupad comments: “The liberated living entities seek that place where there are no material miseries.”

Yet although suffering is natural in this world, people get surprised time and time again when they encounter it. “Oh, no, someone died! Oh, no, a relative has cancer! Oh, no, I hurt my toe! Oh, no, I got a toothache!” They get surprised when they watch the evening news. “Oh, no, a bunch of people died! Why can’t someone stop this? Why don’t the politicians and powers that be just put an end to this suffering?” Even in just coming home, people express surprise. “What? The kids haven’t washed the dishes! My wife hasn’t cooked dinner!” It’s a greater shock for them to hear that the husband has lost his job! People react, “Oh, no, trouble again at the office!” Really? Surprise! Surprise! But this is the reality of life. Some people like to put a spin on it by saying, “Suffering is a part of life.”

People get so exasperated when they encounter miseries. Lao Tzu’s point is that a large part of people’s exasperation is this non-acceptance of reality—we don’t accept the nature of where we are. People want to think, “Everything’s under control. Everything’s working right. Everything’s fine.”

We have to recognize that this material world is a place of misery. Since we have a material body, we should not be thinking that we’re going to be able to find a spot where there’s no misery because the material body brings misery with it. For example, we’ve got teeth. Built into that are toothaches, cavities, etc. And we’ve got stomachs. Sooner or later, we’re going to get a stomach ache. We’ve got so many body parts that sooner or later will malfunction and cause us suffering. 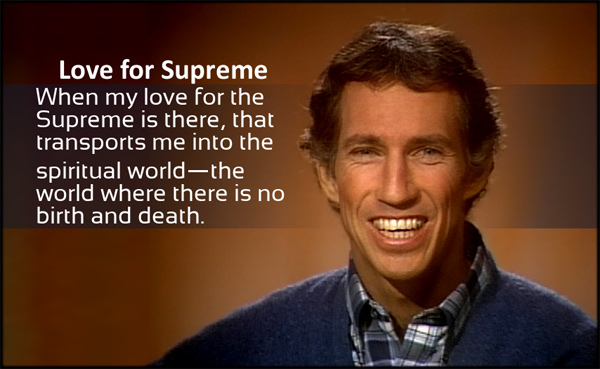 The Supreme Person says that a person “can attain that state beyond all miseries.” This means that a person can achieve the spiritual realm—the world without any material bodies. In other words, the spiritualist who engages in devotional service to the Lord attains freedom from the cycle of birth and death. He is freed from this repetition of taking on one body with built-in misery after another.

Actually, a person who is satisfied in the devotional service of the Supreme Lord is not concerned about the misery of the material body. He knows that this misery of the body will be there. And if the Supreme Lord wants him to be in the material world, which is by nature full of suffering, then he will accept that suffering as his austerity or sacrifice. This is pure devotional service.

For one who has accepted the boat of the lotus feet of the Lord, who is the shelter of the cosmic manifestation and is famous as Mukunda or the giver of mukti [liberation], the ocean of the material world is like the water contained in a calf’s footprint. Param padam, or the place where there are no material miseries, or Vaikuntha, is his goal, not the place where there is danger in every step of life.
—Srimad Bhagavatam 10.14.58

There is danger in every step of life. The problem with the material world is not so much the misery that comes with it but rather the delusion that a person is in that he is home.

We’re always seeking “home.” We seek a place where there won’t be any misery, where the rug won’t be pulled out from beneath us, where the landlord won’t kick us out, where our bank accounts won’t fall apart, where we won’t be too hot or too cold. We’re always seeking a perfect place where we can make a home and it will be good forever. We want to feel “Now things are just right. I have a child. I love my child. I’ve got my nice husband. I’ve got my nice house. Everything’s just like I want it.” But it doesn’t stay that way. Nothing stays the same in the material world. This happiness is a passing phenomenon. This world that you are in is a passing phenomenon. It’s not secure. It’s not eternal. It’s here today but it will be gone tomorrow.

So we have to recognize that the greatest danger of this material world is that we can be lulled into the illusion that “I am home. This is my happiness. This is my life.”

Who Is To Blame?

Even people who are trying to practice spiritual life can be lulled if they are not careful. They may be engaging in unfavorable activities, cultivating material attachments, or even being neglectful and not fully conscious of what they are doing. Thus, their desire to render service to the Lord becomes eclipsed by material desires. In other words, they choose to serve the illusory material energy (known as maya) over service to the Supreme Person. Before they know it, they are gradually lulled into this feeling that “This is my home. I have my house, my job, a nice income. Everything is nice in life.” Then they get surprised a few years down the road when the rug is pulled out from beneath them. And they blame the Supreme: “What are You doing to my life?”

We forget that this material body and the relationships that come with it are temporary and full of misery. So sometimes when we get a shock we get angry at the Supreme Person: “Why are You making my life difficult?” But actually, we’ve set ourselves up for that suffering. We’ve set ourselves up for that fall. And we’ve done that by being careless. We’ve taken our relationship with the Supreme Person lightly and made it a secondary thing, a side thing, rather than the core. In other words, we have other relationships that have become as important or more important than our relationship with the Supreme.

So there is a danger that we get lulled into this illusion that we are home. But this material world can never be the home of the spirit soul because it is temporary and we are eternal. And whenever you take the eternal soul and place her in a temporary situation, then there’s going to be this contradiction or conflict between the eternal and the transitory.

We are eternal. We want an eternal home so when we try to make an eternal home in a temporary situation, then we must inevitably experience the suffering that comes from that when we get ripped away.

Danger In Every Step

There is danger in every step of life. Just today one of my dear friends was out in the water surfing and along came a shark, just cruising some thirty feet away. And my friend was way out in the ocean with almost no one else around. Before the shark came along, my friend may have been thinking, “My biggest problem today is that there are no waves. There are a few, but they are messy and no good for surfing.” At some other time, he may have also thought, “The biggest problem in my life is that there are too many people in the water. They’re all making it hard to get a wave.” But when the shark appeared, he didn’t think about the waves anymore. In fact, he wondered, “Too bad there aren’t more people out here. Where is everyone? Yesterday there were a hundred people out here. Today there are just three of us for that shark to choose from!”

So the shark cruised, by taking his time. Death isn’t afraid of anyone. Then the shark disappeared under the water after sixty seconds of cruising by. I asked my friend, “So what did you do after it disappeared?” He replied, “Well, I immediately went out to the boat.” Since they were far out in a surf place, he paddled to the boat. I asked, “To the boat? You paddled over to where the shark was?” He answered, “Oh, yeah, it was gone.” So the shark just goes under the water and we think we can just go out now because it has disappeared. We figure, “It’s gone. It’s all clear. It’s all okay now.” We don’t consider that danger is lurking there at every step.

For example, a husband and wife may be driving home from the beach, arguing about what they’re going to have for dinner tonight: “I want this.” “No, I want this!” Suddenly they have a car accident. That wasn’t in their plan. The fact is, there’s danger at every step, and at any moment we may have to leave this world.

The point of the Bhagavad-gita is that we must understand that there’s danger, that material suffering is an intrinsic part of this material body and that we should do that which enables us to transcend or be liberated from this dangerous situation of birth and death. That solution is called devotional service to the Supreme Lord.

Many people like to think of themselves as spiritual or religious people. But their love is on their dog, child, husband, or wife. And when they leave this world, they think of their loved one. But just thinking of my child, for example, will not transport me into the spiritual world. Rather, it transports me into the material dimension. I will remain in the world of birth and death.