Transcend The Miseries of This World (Part 2)

Love for the Supreme Lord does not mean that I don’t love others. I can love my spouse, my children, and my friends. But that’s different from the longing we speak of. When we speak about love for the Supreme, we’re speaking about a longing that transcends and is infinitely greater than our longing for anyone else.

I got a letter recently from a person in prison. Obviously, he is very unhappy that he is in prison. He expressed how much he is longing for his wife and children. Being in prison is like semi-death. You’re alive but you’re separated from the world, from all the things you’re attached to. You’re not allowed to live with your spouse, your family members, or your friends. You’re not allowed to eat where you want to eat. You’re not allowed to do what you want to do. That’s the punishment. So you start to long for that which you don’t have and for those to whom you are attached. So I told him, “This is good for you because it gives you the opportunity, before you have to actually leave this world, to see where your attachments really are and who you’re attached to more than anyone else.” I asked him, “Are you longing for the Supreme Person right now? Are you longing for the opportunity to be able to hear and chant His names, to meditate upon Him, to think of Him, or to read His words or hear of His pastimes? Is that what you are longing for? No, because after all, you can still do that even though you’re in prison. So what or who are you longing for? You get to realize who you’re attached to more than anyone else.”

This person gets to practice death. He gets to practice leaving this world. In reality, that’s what old age is arranged for. Most people have bodies that will get old before experiencing death. That’s nature’s arrangement, and it’s a natural progression of breaking our attachments.

The Vedic system is one in which life has different divisions according to age or time. Childhood, or the first five years, is essentially total kid time. Pretty much the kids can do whatever they want. But then after five years old, they start to learn some discipline and go to school. The following years are devoted to education and schooling. Then, after being educated to a certain extent, they consider whether they want to be married. If they do, they have what’s called householder life. In other words, they marry and have children. 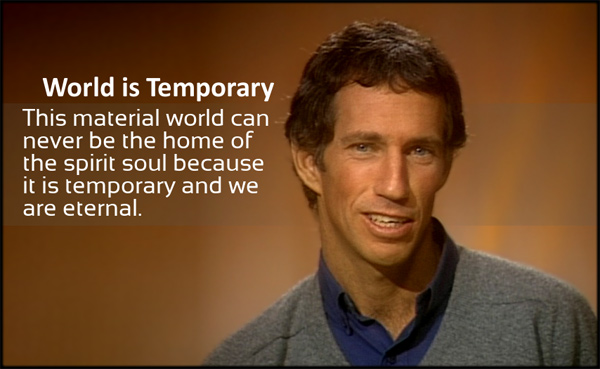 After twenty or thirty years, there is another stage. The parents have raised the children, who now want to have a life of their own. The children develop attachments of their own and want a scene where the parents are not telling them what to do all the time. So the kids leave home. And what happens? The parents experience separation. It’s called the “empty nest syndrome”—here’s mom and dad after the kids have left. This is like death because they are being separated from those who they are attached to. They experience semi-death here. They learn about life in this way. If they are simultaneously being educated and gaining wisdom, then they experience a life that is full of knowledge and understanding. Then, at that point, sex life is finished. The stage of making children is over. Now it’s time for them to simply engage fully in the devotional service of the Lord. They start to focus on where they’re going from here. They start to become aware of their physical mortality.

Up to the age of around forty, people aren’t fully aware of their physical mortality. They think, “I’m going to live forever.” When they reach forty, they start seeing the other side: “Hmm, it can end.” So now is the time to prepare. After all, if you know you are leaving, shouldn’t you prepare for where you are going to?

In the Vedic system, you start to make serious preparation. The kids are gone. You have more time now. You don’t have all those duties of having to cook for them and take care of them. So don’t suffer like some people do in the West: “Oh, no, my kids are gone! I can’t take care of them anymore. I don’t have any purpose in life.” Instead, take that time and use it to cultivate your relationship with the Supreme. Cultivate your love for the Supreme Person and focus on your relationship with Him. In the Vedic system, that time is a very special time. From that point forward, you should be focusing on that relationship more and more. You don’t need to go out and make a lot of money anymore to support the family. You should already have what you need. Now you should live on what you have and live simply.

I recently read about this one industrialist in India who was worth billions of dollars. He had so much wealth, but he was raised in such a way that he understood the real purpose of life. At about sixty years of age, he was running so many companies and was very active in the political arena. He had all this political power as well as political opponents. After all, in politics, you have your friends and your enemies. In any case, he then knew, “Now is the time.” So he left all of that behind and simply spent his life going to places of worship and places of pilgrimage. He didn’t keep any money but went around begging, not because he was afraid of starving or because he was a poor person, but because now he was going to live that phase of his life where he was totally dependent on the Supreme. He was not going to depend anymore on his cleverness, intelligence, abilities, businesses, and so on. He was just going to depend on the Supreme Lord. He had the faith that “The Supreme Lord will take care of me, but I have to act on that.” And the way that he acted on that was that he simply followed the Vedic process of begging for his necessities. In other words, if he needed to eat something, then he would go to the householders. And just like he used to give people rice when they came to him when he was a householder, now they put some rice in his bowl.

What’s interesting is that naturally, he came across all kinds of people. After all, you don’t know who you’re going to come across when you knock on that door. Will they be friendly? Will they be nice? Will they shoo you away like a dog? Will they throw something at you? This is the challenge you’re faced with when you walk up to someone’s door. And there were times when he would go to the homes of former political opponents. Now that’s embarrassing. There’s nothing more humiliating or humbling. And that’s the purpose of going from door to door asking for rice. The reason why monks do this is not because they’re hungry or because they don’t have any means. That’s not the purpose from their point of view. Their purpose is humility. Nothing humbles you more than having to go and knock on somebody’s door and extend your little bowl and ask them if they have some rice. You’re a beggar.

So here was this guy who was a multi-multimillionaire and he humbled himself. Previously, he was riding in all the Rolls Royces. Now he was walking with his little bowl. Before, he was in this position where he was higher than everybody, so much so that when he walked into a room, everybody gave way and paid him respect. People came to him and begged from him all day long. It’s a position that makes people feel powerful, and this is a reason some people like being philanthropists. They like to be rich because they like to give to poor people. It makes them feel big, strong, and powerful: “Oh, here’s a poor person. Let me give him an apple.” So this person was sought out by so many people. Even the politicians were coming and begging from him. The prime ministers were beseeching, “Please support me. Give me money for these elections.” Now this time, he was the one begging. He didn’t lose it in the stock market. It’s just the Vedic system. The idea is, “Now I must focus on my relationship with the Supreme Lord because I’m going to leave this world soon.”

We are all in prison, in a sense, in this material world. Some of us have nicer cells than others. But while we’re here, we need to be cultivating our longing for the Supreme Lord so that we will leave this prison sooner or later and go to Him.

Thank you very much.